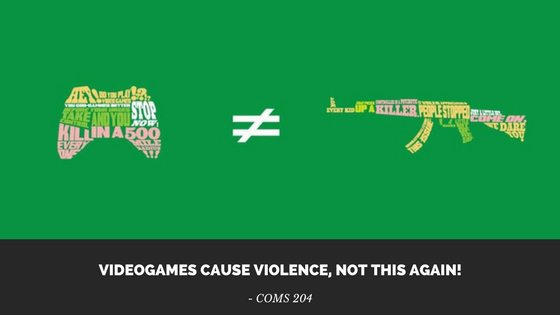 Due to the school shooting in Parkland, Florida, responsible for the loss of 17 lives, Donald Trump held a meeting at the White House informing the public of the threat of semi-automatic weapons, mentioning that violent videogames maybe to blame.

“I’m hearing more and more people saying the level of violence on video games is really shaping young people’s thoughts,” Trump said. “And then you go the further step, and that’s the movies. You see these movies — they’re so violent, and yet a kid is able to see the movie if sex isn’t involved but killing is involved.”

Trump’s comment on videogames was not that long but the fact still stands that he does somewhat blame videogames for violence while also throwing in movies and the internet.

So, the question standards, do violent videogames make people violent?

Well, Dr. Whitnet DeCamp, WMU associate professor of sociology and associate director of the Kercher Center for Social Research, conducted three studies over the past several years asking that very same question. What they showed he said was minimal relation between the two.

From a report by Western Michigan University, DeCamp says it seems nearly every highly publicized shooting comes with another slam against violent video games, and those claims are often perpetuated by the news media, politicians, and other scholars. However, these criticisms are vastly overstated.

The studies involved “young males in my research were in grades eight and 11” and even before beginning they found that “violent video games were a poor predictor of violent behavior,” DeCamp says.

So why is the violence still happening?

Tyquan Holloway, a freshman Graphic Design student at Radford University, believes it is because of bad parenting.

“Parents should be more mindful of what their kids are thinking about and how they are feeling because in 2018 these kids are getting out of control,” Said Holloway. “You look back at the 1990s, and they were not doing half the crap we are doing now. You know why because they had good parents.”

Since the first congressional hearing in 1952, about the connection between television violence and homicides, hundreds of studies of the digital media have taken place, according to the American Academy of Pediatrics in order to find evidence that there is proof that violence has some relationships within the digital media, which came from the July 2016 guidelines on media violence.

Those guidelines included a list of from the American Academy of Pediatrics who said: “video games should not use human or other living targets or award points for killing, because this teaches children to associate pleasure and success with their ability to cause pain and suffering to others.”

Often, we seem to forget that thousands of kids who grew up playing videogames are living their lives with little to no violence. Most game developers are not focused on rewarding their players for violence but to give them a compelling and thought-provoking story to tell and share with others.

Decamp says, “The parental attachment between the youth and the parent, the monitoring activities of the parents—that is, whether the parents are aware of what the kids are doing—and parental enforcement of the rules were all strong predictors.” He also mentions that seeing, hearing, or experiencing violence in the home are also predictors of a child’s violent behavior.

Home life seems to matter more than just playing these videogames according to Decamp.

Parents should be involved with what their kids are and are not doing, but it is best to not look at these “two things in a vacuum,” he states.

People, notably higher-ups, need to know that if they want to fix a problem dealing with kids and older teens that they must think as these people do because it is much deeper than just, “violent videogames are made to have others enact these actions on to others,” no not at all.

Christopher Ferguson, associate professor and co-chairman of the Department of Psychology at Stetson University, supports DeCamp’s view and that violent video games may help reduce societal violence rather than increase it.

“Basically, by keeping young males busy with things they like, you keep them off the streets and out of trouble,” he said.

The bottom line is that parents and people, in general, need to know that “we need to take a lot of caution before we place the blame on any one particular thing,” said DeCamp. While, Ferguson noted that “almost all young males play violent video games,” and yet the majority are not committing crimes.

The goal of videogames is to be as inspirational as the cinema, as Imaginative as a book, and as abstract as music and sound. It is important to realize that videogames are art and that art has many interpretations, but it is never to harm anyone, instead to share with others and have ideas that keep us thinking.

It is not meant to be a scapegoat for all the world’s problems.