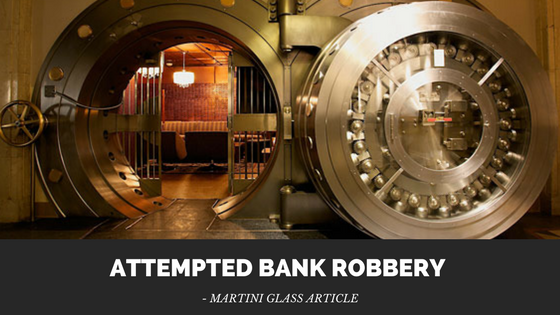 David C. Jefferson was toting a flower delivery box while walking to the bank. When an officer came up to the man, he pulled out of the box a sawed-off shotgun; the officer shot him down before the suspect could get one off.

The attempted robbery at the Union Credit One bank in Tamoon on 1416 Pal, Grove Dr. yesterday afternoon with suspect Jefferson captured by an Elliot Mess, an undercover agent at the time.

The suspect was leaving his car heading to the bank carrying the flower delivery box when the officer went up to the man to say, “Excuse me…” the man then pulled out a sawed-off shotgun from the box.

As the suspect was loading a round in his chamber Mess took out his pistol and fired two shots at him, one shot for each shoulder.

During the firing, it is said through internal police investigation that Mess fired two shots at the fleeing suspect in Tamoon without regard for civilians in the area who could have been hit.

The officer was reportedly suspended for seven days without pay 15 months ago for “inappropriate discharge of his firearm while on duty.”

Mess arrested the man and called for the Chucktown police department for assistance.

Soon after, Mess’s back up came while the EMTs arrived a few minutes later.

The EMTs treated and transported the suspect with a police escort to Mercy Hospital and with further investigation, the EMT’s discovered three bullets on the suspect’s body, which was not in the police report.

Police stated that the suspect’s shotgun still had a round in the chamber during the investigation and the bullets turn out to be the bullets from Mess’s gun.

Jeff Naggier, 24, a supervisor at Chucktown Water Treatment plant, said he saw the bank incident from across the street while eating Arby’s which is 60 feet from the bank. Others who had lunch at Arby’s said they did not see or hear anything.

David’s wife said they had been separated for several months and she had not heard from him since then. She included that he had severed a couple of years for assault five or six years ago. The wife seemed not too fond of her husband and said it did not suppress her that he is locked up.

The suspect was charged with unlawful use of a firearm, assault with a deadly weapon, assault of a police officer, attempted murder, possession of around 2.5 or 5.0 ounces of Cannabis, and operating a motor vehicle with expired license tags because of the 1995 Chevy Caprice registration found on him.