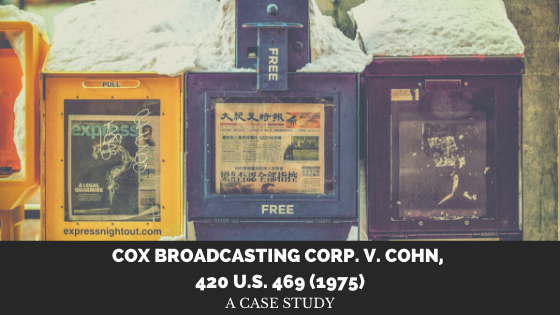 The parties involved were Cox Broadcasting Corp. versus Cohn.

After obtaining information from seeing the indictment of the alleged perpetrator’s public criminal trial, Cox Broadcasting Corp. reported on the news the name of a deceased raped victim. Martin Cohn, the father of the seventeen-year-old girl who was raped and murdered, pursued civil action against Cox Broadcasting Corp. under a Georgia statute that said it violated a Georgia privacy statute that prevented members of the media from publicizing the names or identities of rape victims.

It went to the trial court, which held that the name of the victim was privileged information under the First and Fourteenth Amendments and that Georgia statute held no defense for this speech and that the Georgia statute provided a civil remedy and granted the case summary judgment. On appeal, the Georgia Supreme Court agreed that the First and Fourteenth Amendments did not protect Cox Broadcasting Corp.’s publication of the victim’s name; however, they said that the trial court erred in  construing the Georgia statute to extend a cause of action for invasion of privacy while it needed to be fixed so that the complaint stated that it was a cause of action for common law invasion of privacy, which in return sent it back to the lower courts.

On a motion for rehearing, the Supreme Court of the United States stepped in before a “final” decision was again made at the lower courts and granted a petition for certiorari and affirmed, which explained that the state judgment was “final.” They found that the First Amendment protects the publication of public information and that Georgia’s law outlawed speech based on its content, so it sustained the statute as a legitimate limitation on the First Amendment’s freedom of expression.”

The question laid upon the court: does the First Amendment protect the publication of sensitive information, which was public information from criminal prosecution or civil liability?

The rule of law is that it is unconstitutional under the First Amendment to criminalize the press to release the name of a rape victim or to permit a private right of action against the press for doing so and that a state supreme court on a federal issue may be considered a final judgment for the purpose of an immediate appeal to the U.S. Supreme Court, even if the lower state courts have not completely concluded proceedings.

Justice White recognized the importance of press freedom and how it should not be restricted in this case and how the court had enough reason to assume jurisdiction of this case as it dealt with the constitutionality of the statute. The reason Justice White gave was that the press is an important resource for citizens which allows them to scrutinize government proceedings and that “the interests of privacy fade when the information involved already appears on public record.” Justice White also said that this restriction on media was a dangerous encroachment on press freedom and that it “would invite timidity and self-censorship.” Justice Rehnquist dissented, stating that the lower courts did not make a “final” decision and that the Supreme Court of the United States shouldn’t have stepped in as they did.

“We are reluctant to embark on a course that would make public records generally available to the media but forbid their publication if offensive to the sensibilities of the supposed reasonable man. Such a rule would make it very difficult for the media to inform citizens about the public business and yet stay within the law. The rule would invite timidity and self-censorship and very likely lead to the suppression of many items that would otherwise be published and that should be made available to the public,” Justice White wrote in the opinion.

“There are now at least four categories of such cases in which the Court has treated the decision on the federal issue as a final judgment for the purposes of 28 U.S.C. § 1257 and has taken jurisdiction without awaiting the completion of the additional proceedings anticipated in the lower state courts. In most, if not all, of the cases in these categories, these additional proceedings would not require the decision of other federal questions that might also require review by the Court at a later date, and immediate, rather than delayed, review would be the best way to avoid “the mischief of economic waste and of delayed justice,” Radio Station WOW, Inc. v. Johson, supra, at 326 U. S. 124, as well as precipitate interference with state litigation,” Justice White wrote in the opinion.

At first, this case was very confusing as it started to go into jurisdiction and other legal policies and laws as well, but that didn’t make me lose sight of what this case was on primarily.

I would have voted for Cox Broadcasting Corp. because even though how sensitive public information maybe, it’s still public information, and one shouldn’t be punished, none the less criminalized, for speaking or writing about it. It would create a chilling effect where the media doesn’t know what to publish, say, or even check out facts and inform the public without that fear of being prosecuted.

I think the Supreme Court of the United States did the right thing jumping in when they did because having this case go back and forth over and over again wastes time and money, and it was clearly a broader matter than merely the state of Georgia.

A 1st Amendment assessment from my COMS 400 Communication Law and Ethics class at Radford University. This is 7 of 10.