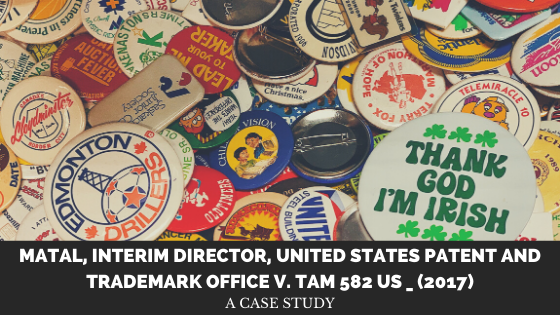 The parties involved were Matal versus Tam.

Simon Shiao Tam, and his band The Slants, wanted to register a trademark for the name of his band, which they wanted to “reclaim” the term and drain its denigrating force as a derogatory term for the Asian people. The Patent and Trademark Office (PTO) denied an application for registration of the name under the Disparagement Clause of the Lanham Act of 1946 15 USC. 1052(a), which prevents the registration of trademarks that may “disparage … or bring … into contemp[t] or disrepute” any “persons, living or dead.” The PTO denied Tam’s application because it found that the name would be disparaging towards “persons of Asian descent.”

Tam wanted to challenge the denial and so he appealed the trademark officer’s decision, but he was unsuccessful as it was refused again by PTO’s Trademark Trial and Appeal Board against Matal, the Interim Director of the United States Patent and Trademark Office. United States Court of Appeals for the Federal Circuit of Appeals upheld the PTO’s decision on appeal. An en banc Federal Circuit finally decided to side with Tam and said that the PTO is incorrect in refusing the trademark application and that the Disparagement Clause is unconstitutional under the First Amendment’s Free Speech Clause.”

The question laid upon the court: does a clause preventing trademarks of disparaging or offensive words infringe on the First Amendment?

The rule of law is that it is unconstitutional under the First Amendment to deny the registration of a name as a trademark on the basis that the trademark disparages or brings up any living or dead people or groups.

Justice Alito delivered the opinion that if a trademark becomes government speech when it’s registered, “the Federal Government is babbling prodigiously and incoherently.” Nothing in the Court’s system states that they support the idea that once a trademark is registered, it becomes government speech. Further, Justice Alito pointed towards the Central Hudson precedent, which states that a restriction of speech must serve “a substantial interest” and be “narrowly drawn,” and concluded that the Disparagement Clause did not satisfy that test either, so the application of strict scrutiny does not work in this case, and it cannot withstand even “relaxed” review.

The majority of decisions were 8 votes for Tam by Roberts, Kennedy, Thomas, Ginsburg, Breyer, Alito, Sotomayor, and Kagan; while 0 were against Tam as Gorsuch did not participate in the discussion or decision of this case.

“Regardless of whether trademarks are commercial speech, the viewpoint-based discrimination here necessarily invokes heightened scrutiny. See Sorrell v. IMS Health Inc., 564 U. S. 552, 566. To the extent trademarks qualify as commercial speech, they are an example of why that category does not serve as a blanket exemption from the First Amendment’s requirement of viewpoint neutrality,” Justice Kennedy wrote in the opinion.

“It is thus far-fetched to suggest that the content of a registered mark is government speech, especially given the fact that if trademarks become government speech when they are registered, the Federal Government is babbling prodigiously and incoherently. And none of this Court’s government-speech cases supports the idea that registered trademarks are government speech. Johanns v. Livestock Marketing Assn., 544 U. S. 550; Pleasant Grove City v. Summum, 555 U. S. 460; and Walker v. Texas Div., Sons of Confederate Veterans, Inc., 576 U. S. ___, distinguished,” Justice Alito wrote in the opinion.

I would agree with the courts in this case. While this is a small case in trademark law, it shows that the courts look at everything and having nothing fly under their nose. The slightest move to infringe upon First Amendment rights needs to be looked at with more scrutiny as freedom of speech must be protected at all costs.

A 1st Amendment assessment from my COMS 400 Communication Law and Ethics class at Radford University. This is 8 of 10.