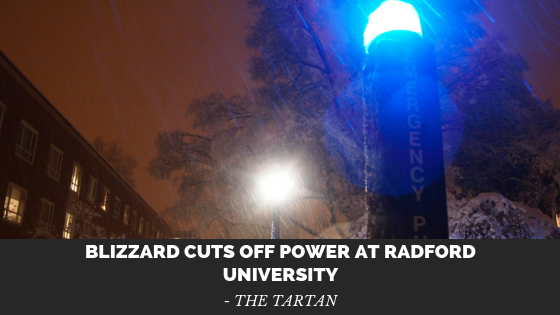 Around 10:30 p.m. Saturday, March 24 the power went out at Radford University due to a blizzard surrounding the City of Radford.

The power outage first started with the sidewalk and street lights, eventually cutting off some of the building’s power entirely with emergency lights still working.

Snow accumulation at this time was about 12 inches.

Tori Denny, Radford University Resident Assistant at Trinkle Hall, had this to say about the power outage, “As an RA, in any situation, it is our primary goal to make sure that all of our residents are safe,” said Denny. “In the instance of a power outage, such as the one we just experienced from the snow, my biggest concern was students being stuck in the elevator. My fellow RA’s and I called RUPD immediately after the power went out, and they came as quickly as they could to help!”

It seemed that most students were calm and collective during the outage while also supporting each other by congregating in the halls of dormitories.

Jamisa Williams, a freshman art major, said, “I would be fine with this, I’d be sleeping.”

Williams continues to talk about the people who were stuck in the elevator in Trinkle Hall, “That’s dangerous! I’d be scared! Luckily there is no one in there now.”

Radford University soon sent out an email to its students at 1:39 a.m. informing them of the outage.

“Due to the recent heavy snowfall, the New River Valley has experienced widespread electrical outages, adverse conditions on local roads, and downed trees and power lines. These may create hazardous condition on roads and sidewalks in the city and on campus.”

Radford also had these precautions to share with their students:

Radford University is promptly recovering from the storm as the facility help clean up the many fallen or broken tree limbs around campus and by keeping most of the sidewalks covered with salt to prevent slipping on ice.

Radford relations is also ensuring safety by keeping their students informed of the weather and any significant closing that may happen on campus through emails and other various alerts they give out by social media.

The ten-day weather forecast expects highs in the 50s while Thursday will reach up to 70 degrees and lows to reach in the mid-40s. There is an average of a 50 percent chance of rain for the next ten days, but for the most part, it will be partly cloudy.

However, this storm was a pretty big one, and I would say this is not the last of it, even if Spring is here.

Below are some video clips during the time of the outage:

Power is now out at parts of Radford from what I can see and hear from other. @radfordu @WDBJ7 pic.twitter.com/Oy2OJLUtHT

*This article originally published on The Tartan*