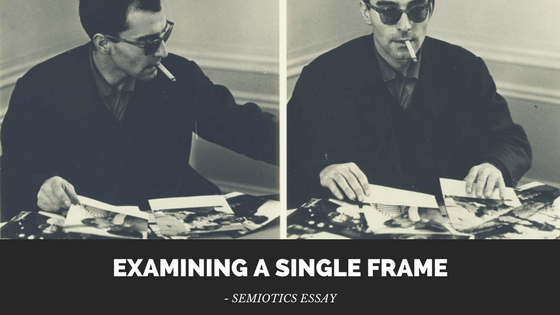 The man in black sitting on what looks like a trolley in some foreign country seems out of place, and it’s with Barthes Five Codes I can determine what this man is genuinely feeling or thinking. What is he looking at? Why is he there? Why is he dressed up? Like pictures, a frame speaks a thousand words, but our own experiences shape what we see through the metaphors, metonymies, and synecdoches of the characters.

The enigma code sparks curiosity with this frame by showing a very still white man dressed in black. The enigma that we’re looking for is what is he there for, why is he staring at the camera or is he looking at the gun on the back of a solder in front of him. It’s with these types of questions that make us engaged in the narrative. More specifically in thrillers like Seven, Gone Girl, or (as pointed out in the book The Langue of Film, page 27) Psycho. We edge up in our seats to the screen, we open our mind to the possibility that something might happen, and we open our eyes to scan every detail to see if we can piece the films or frames enigma together.

The connotative code refers to what a person wears, speakers, how they walk, and what they do with subtle body movements. I can guess that this man is dressed in a black suit because he is responsible and likes to make an impression when seen. He cares about his work, but his facial features say otherwise. The man seems board, unpleased with something, or even determine and focused on doing or getting something/somewhere. He seems to be leaning to his right past the aisle of the trolley.  It’s with connotative that we can piece together bits of information that mentally compose into what we might think a man in a black suit might be in our real world.

The action code suggestions that the actions a person makes can have a significant impact, big or small, on what’s to come next. In the book, The Langue of Film, page 27, they use a cowboy tightening his gun belt, but he isn’t adjusting his clothes he is making a life or death decision as their example tell us. What I see is a man leaning into the aisle scooping out his surroundings waiting to grab the gun off the guard while nobody is looking, or does he want people to look. My experience of films has given me this conclusion that he just might be an assassin or contract killer. With the help of the enigma and connotative I can closely exam the man in black and give my thoughts on the action code based on the connections I make and gather my personal information about this guy, but we never know that we do this at all unless were taught the meanings.  It’s just how we individually learned how to watch movies and interaction with the culture around it.

With symbolic code, we can determine the antitheses of the characters or symbols in a film or frame. Hierarchy plays a prominent role in this frame with the man and women in blue are just your everyday citizens minding their own, while two guards sit in behind them, and two guards sit in front of them surveying or waiting for something. The two outliers in the frame seem to be the man in black with a serious facial expression, but light shines brightly on him while the guard on the left appears to be smiling or grinning in a darker light. I could infer that there might be some hero verse villain at play or rich versus poor, but there seems to be somewhat of a power struggle. We know who is winning right now, but the man in black appears to have the determination not to stop, but he’s been pretty beaten up in the process giving the frames symbolic meaning regarding struggling foreign countries.

The cultural code is a mix of all the other codes already discussed meaning that the known knowledge about a current culture, character, or symbol and the laws we associate with them give the films we watch meaning, and without that meaning in films and art, in general, are unfathomable. We can tell in this frame that laws in whatever country therein must be pretty serious if five or more guards are on a single trolley with citizens quiet and looking down or away and one particular guy in black staying quiet while waiting for his turn to accomplish a better future for himself and maybe the family he might have.

In an alternative argument which includes both metaphor and metonymy, we see hope (the metonymy) in the light when referring to the man in black. Hope is the word we use to take the place of a man determined to make a change cast in the light. The Metaphor here is “choices are crossroads.” Choices begging decided by the man in black while the crossroads are the actions of the guards around him. The comparison of two things, the metaphor versus an item associated with something specific to that idea, the metonymy. While very similar in function yet their different in concept.

Lastly, we disuse synecdoche and why it’s one of the most defining pieces of a character in films and this frame. Synecdoche refers to some portion of a thing that stands for the whole of something, the man in black if you will. In this frame, the single defining characteristic of this man is his dark black suit. It defines everything about him. That he is not with anyone but himself, and he is not like the others. The man has his own goals that he wishes to accomplish to fulfill whatever task he was assigned or assigned himself. Most importantly it’s how we define characters we like, Captain America and his shield, Thor and his hammer, and Hulk and his fists. It’s a distinguishing feature in films, and it’s how we connect dots and put two and two together.  The question is what is your Synecdoche?