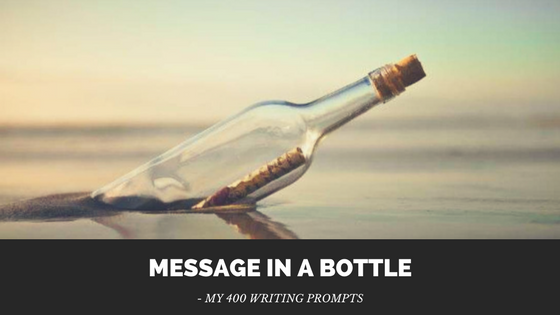 *While at the beach you decide to write a message in a bottle. What would it say? Who would you like to find it? 1/400*

Keeping something for so long after you know you were supposed to initially give it away can be hard to give up.

When I was younger, my parents rented a huge beach house which was three stories tall. Probably the biggest beach house I’ve ever been in. My grandparents helped pay for half the rent, and it was nice having them over. I mean it can get pretty lonely in that big of a house, so it’s good to fill it up with people, not stuff. That just shows you have problems.

I’m pretty sure we were in Duck within the Outer Banks, but we drove over to Kitty Hawk Kits at night to just get out of the house. I mean it’s a lovely house, but we didn’t go to the bench because of the house. So, the shopping center we went in is one of Kitty Hawk Kits central locations in front of these enormous sand dunes. I mean huge! There used to be a golf course there, but it was buried quite a while ago. So, the building is sort of an outside shopping center/mall. They have a fudge place and an old-timey photoshop place. Whats cool about the fudge shop is the owners actually do some cool advertisements each year with some kind of pop culture theme, but I don’t think we ever got fudge from them. I could be wrong. The old-timey photo shot is just something I stay away from. After seeing pictures of my mom and her parents when they were younger doing that, yeah…no thanks.

Now, we finally go into the store and on the top floor up the staircase next to the rock climbing wall is where all the toys are. It’s like Toy’s R Us but for the 70’s beach kids. You know, your at the beach, there’s not much else to do then be on the beach. Anyway, I digress.

There it was, the case in which a message in a bottle do it yourself kit was lying. Now that I think of it, it probably was a scam since literally I could make it myself at home, but anyways, I got the set, and I took it back home. I messed around with it for some time and I knew what I had to do with it, but for some reason, I just didn’t want to let it go. I didn’t even fill out any of the information I had to put in the bottle. Now it’s forever kept in my mother’s car console in the back seats.

So today I write what I would have said if I did throw it in the ocean today:

“By just doing and taking all those nagging thoughts people have of you, and you have of yourself it allows you to become open to new experiences and a way of thinking like no other. It’s the only way you will be remembered because the only people those we remembered actually did something. You can do, that’s all you know how to do.”

“Create. Inspire. And don’t give a crap what anyone else thinks.”

P.S. for those four-year-olds out there: Do. Do.