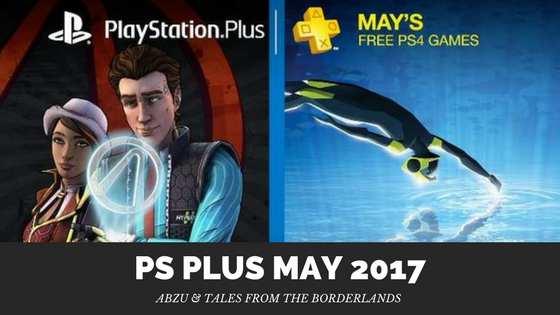 May is almost here and that means only two things: the 25th is my birthday and the PlayStation Plus games of May are on the way. PS Plus is bringing Tales from the Borderlands and ABZÛ on PS4.

It’s Not Gold Its Plus

Taking a break from the main story after Borderlands 2 to add more to the lore with main charters Rhys and Fiona. They’re on a quest to find sweet loot that may be harder to get than they think. Jump back into the crazy world of Pandora in a new way because shooting isn’t everything.Tales from the Borderlands is a five-part episodic Telltale Games series, creators of games like The Walking Dead and The Wolf Among Us.

ABZÛ, created by fist time developers Giant Squid Studios, is an award-winning journey that is bigger than the deep blue and lets your artistic imagination set free.

On PS3 is Blood Knights a gory hack and slash role-playing game that keeps you hooked from bloody sword to bloody sword. Port Royale 3: Pirates and Merchants, manage your gold, trades, ships, and more in this 16th century Caribbean Civ./Economic simulator.

And last but never least the PSVita, we have Laser Disco Defenders and Type:Rider. Laser Disco Defenders, created by another first-time developer Out of Bounds games, is a fast-paced shooter that not only your goal is to kill your opponent but to dodge the self-inflicted bullets. Type:Rider is a simple puzzle that shows the true art of Typography and the story behind it.

Enjoy the games and tell me your thoughts in the comments down-below or Tweet at me @Dylanslegos. See you next month!